Emma and Sarah Hayes are celebrating the growing success of their business, Deliciously Clean Eats, which provides catering for the Coast’s Super Netball team.

The 27-year-olds from Currimundi, who graduated from USC in 2016, started the business with entrepreneur and recipe book author Meagan Kellert in 2017 after the trio chatted at a gym about their desire to promote healthy eating for people of all ages and fitness levels.

The business now includes a dietitian-led, pre-packaged meals service covering the Sunshine Coast and northern Brisbane, a café at Kawana Sports Hub, and corporate catering contracts ranging from a hospital and a council to a multinational company.

“The idea was to create good food that overcomes the stigma that healthy food tastes bad,” said Emma.

“We wanted to make it easy for people to access that food, then educate them about portion sizes and meal ideas.

“We had done some catering early on for Lightning players, while they were travelling, and started as regular suppliers on game day at USC Stadium in 2019.”

She said canapes and grazing boards were served to teams and corporate clients.

And the players’ favourites? “I’d say our Mexican feast and signature brownies.”

Sarah, who previously worked for a clinic specialising in aged care and chronic disease, said there was a big demand for convenient, nutritious food for people “on the go”.

“We want to show people they can achieve balance and live a healthy lifestyle without meals being boring,” she said.

The sisters said the learning curve in running a small business was exciting and challenging.

“There is so much that goes on that no-one sees – rostering, ordering packaging and linen, meetings, transporting food, licensing and checking food standards,” said Emma.

“We problem-solve a lot. You just need to get things done. It’s a hard slog but passion is the key to creating the dream.”

They have drawn on knowledge gained during their USC degrees, such as adapting meals to suit dietary requirements, developing menus to suit different populations, and advising customers about basic nutrition.

They said they enjoyed studying together on campus at Sippy Downs after enrolling in 2012.

“From a young age, we both loved being active and cooking,” said Emma.

“After travelling America together in our gap year and seeing families rely on takeaway food, our interest in promoting healthy eating habits grew.

“After we graduated from Caloundra State High School, we started studying nutrition and sport exercise science at a uni in Brisbane but decided the lifestyle wasn’t for us.

“We were more interested in the nutrition science, so we moved back to the Coast and enrolled in the USC degree.” 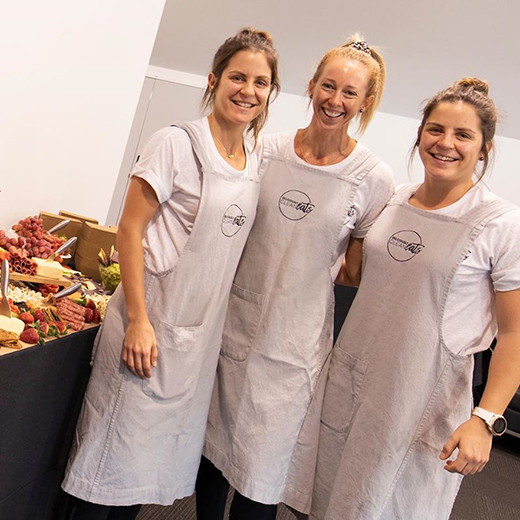