“This facility will allow USC to conduct much-needed research into what is a globally diverse and ecologically significant natural environment, and to bring in other researchers from across Australia and around the world to focus their expertise on the Fraser Coast,” she said.

“We’ve already had colleagues from the Commonwealth Scientific and Industrial Research Organisation (CSIRO) visit to inspect the new facility and talk about future collaborations,” she said.

USC has refitted an existing laboratory centre at the Hervey Bay TAFE to include specialist equipment for both genetic and stable isotope tissue sample analysis, which is critical in understanding the ecology and population structure of different species.

It will also allow researchers to perform necropsies – or animal autopsies – to increase understanding of the threats facing the region’s animal species, including climate change and marine debris.

Dr Townsend, the lead academic of internationally renowned scientific programs Project Manta and Turtles in Trouble, said the Fraser Coast was an uncharted frontier for marine and terrestrial research.

“Maybe because it is wedged between Moreton Bay and the Great Barrier Reef, the Fraser Coast has historically been overlooked in terms of research, and it shouldn’t have been,” she said.”

“Its natural environment includes the world’s largest sand island, globally significant wetlands, unique and critical habitat for migrating humpback whales, and is home to half of Australia’s bird species and other rare marine fauna and flora.”

“Our goal is to use this facility to expand our understanding of sea biology, climate change ecology and the environmental impacts of human activities on coastal, marine and river ecosystems,” Dr Holmes said.

This would include new research to address gaps in knowledge of the movements and behaviours of shark, dugong, dolphin and fish populations in the wider region.

The laboratory will also be used by a growing number of USC Higher Degree by Research students based at USC’s Fraser Coast campus who are conducting a range of studies into the region’s ecology. 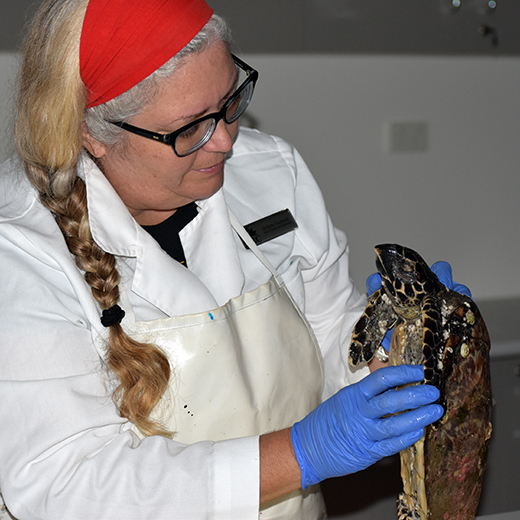