The Great Barrier Reef Foundation is partnering with USC Australia for the first time through the Reef Islands Initiative, investing $2.4 million to set a benchmark to measure change from local and global climate pressures on critical reef species and habitats including seabirds, humpback whales and sea turtles.

The team of researchers from USC, The University of Queensland and Southern Cross University will also provide new insights into the ecosystems of world's largest coral reef system.

“As the southernmost island in the Great Barrier Reef, it’s predicted to be one of the last to experience the increasing effects of global climate change, which makes it an excellent location to begin this process,” Dr Townsend said.

“Over the next two decades, the island’s biodiversity is predicted to change as northern species drift south to escape rising ocean temperatures.”

The four-year research project – which is part of the Great Barrier Reef Foundation’s Reef Islands Initiative and supported by Lady Elliot Island Eco Resort and Queensland Parks and Wildlife Service – is expected to provide a research template for other reef islands.

“Our reef and its islands are coming under increasing pressure from a growing combination of man-made and natural threats. We are already seeing the effects in many parts of the reef and, without help, the outlook is bleak,” Ms Marsden said.

“Reef islands are like modern day ‘arks’ as they afford protection and safety for an extraordinary diversity of wildlife,” she said.

“That’s why we’re working with our partners to make a real difference through our Reef Islands Initiative, safeguarding our valuable reef islands and the benefits they provide into the future in an increasingly challenging environment.”

“This critical research will generate comprehensive in-water species lists, making it possible to quantify future changes that may be caused by climate change,” she said.

“The project will also conduct much-needed research into how processes on Great Barrier Reef islands connect to surrounding in-water coral reef environments, from microscopic algae all the way up the food chain to sharks and manta rays.”

Researchers will receive a helping hand from postgraduate students, project managers, and trained teams of citizen scientists to compile baseline data on its habitats and species.

“Our overarching goal is to fill this critical knowledge gap to support resilience-based management for the island and its surrounding reef, giving us strategies to future-proof this important ecological and economic region,” Dr Townsend said.

Visitors to the island will be able to contribute by sharing with the research team photos and video images they take of marine life, by emailing them to: Project_Ark@usc.edu.au.

Drones will be used to provide high-resolution maps of island vegetation, revegetation areas and part of its shallow coral platform.

Lady Elliot Island is the first ‘ark’ included in the Reef Islands Initiative, a 10-year, $14 million project to establish a network of climate change refuges to protect critical habitats on key Reef islands.

Led by the Great Barrier Reef Foundation, the Initiative is supported by funding from Lendlease, the Australian Government’s Reef Trust, the Queensland Government and the Fitzgerald Family Foundation.

“It will give us a detailed baseline to monitor the impressive revegetation efforts on the island and assist in the interpretation of changes to surrounding coral reefs.” 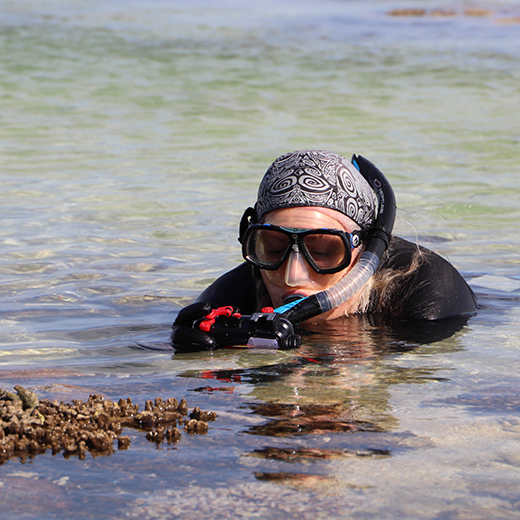