Member for Dickson and Federal Minister for Home Affairs Peter Dutton today declared the building open after addressing a crowd of 430 invited guests about the significant positive impacts the university campus will bring to the region.

Before unveiling a plaque to mark the occasion, Mr Dutton said USC Moreton Bay would forever change the educational, employment and earning potential of one of Australia’s fastest-growing regions.

“It’s great to be here celebrating the opening of a world-class university right in the heart of our region,” Mr Dutton said. “For the first time young people will have the opportunity to undertake tertiary study in our region with world-leading facilities.

“In fact, there’s $15 million of tech built into this precinct, including a thermodynamics laboratory, nursing simulation rooms, robotics facilities, and even a large ‘superlab’ for chemical experiments.”

Mr Dutton said he was looking forward to seeing how local businesses respond to the University’s arrival in the way they innovate, expand and create new opportunities.

USC’s Vice-Chancellor Professor Greg Hill thanked Mr Dutton for his efforts in securing the $121 million Commonwealth loan that enabled construction of the foundation building as stage one of the new campus.

Professor Hill said the Moreton Bay region was significantly under-represented in higher education and had been the only location of its size in Australia without its own full-service university campus.

“Today, that has all changed,” he said. “We now have the exciting opportunity to harness the region’s true potential, significantly boosting education opportunities for local residents with jobs-focussed programs that have been tailored to meet local needs.

“The strong demand for university education in Moreton Bay is clearly evident, with Semester 1 enrolments already exceeding our expectations across the 50 undergraduate programs offered here.

“In fact, our QTAC first preference applications indicate that USC has become, overnight, the university of choice for Moreton Bay residents.”

Professor Hill praised Moreton Bay Regional Council for its vision of having a university campus at Petrie, for selecting USC to create the campus, and for providing the land required for the project.

“From the outset, the local community’s support has humbled us as we built this world-class foundation building – a three-level monument to aspiration and capacity building for Moreton Bay,” he said

“It must be said, if not for the vision and determination of the Moreton Bay Regional Council and its Mayor, this might not have eventuated in this way.

“And if not for the Commonwealth and State Governments recognising the untapped potential in this region, it would have made the journey to this point a lot, lot longer. And, of course, without dedicated and passionate USC staff this would never have been possible.”

The USC Moreton Bay foundation building was designed by Hassell Studio and built by construction firm Hansen Yuncken over 18 months.

It has a huge central atrium that will be suitable for community events, and has been designed to cater for rapid growth of the student population (up to 3,600 students) over the campus’s first three years.

More than 1,200 students have enrolled to study at USC Moreton Bay this semester, with the most sought-after degrees so far being Nursing Science, Animal Ecology, Psychology, Biomedical Science and Social Work.

The campus is tipped to grow significantly over the next decade, with an anticipated student population of 10,000 by 2030.

It will become the centrepiece of Moreton Bay Regional Council’s ‘The Mill at Moreton Bay’ development, which was declared a Priority Development Area by the State Government in 2016. This development will include commercial and residential areas, as well as large areas that will be returned to nature. 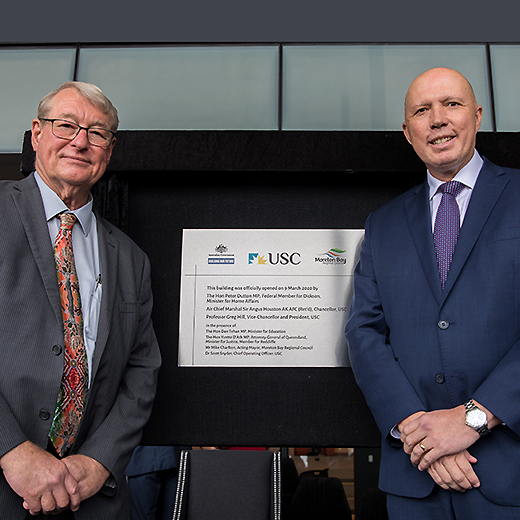