USC Associate Professor in Child Development and Learning Dr Michael Nagel was invited by a former student, experienced Queensland secondary educator Scott Francis, to collaborate on his book, Your High Performance Guide to Study and Learning, due for release in August.

The authors have combined high-impact study techniques with the latest neuroscientific and education psychology research to create 20 key strategies to help students get the most out of their study and learning time.

In each chapter, Dr Nagel, who has written several books and articles related to neurological development in children and adolescents, provides an expert opinion on how the brain functions and what that means for students as they learn.

A key recommendation is to eliminate devices and screens to promote constructive and intense studying, with Dr Nagel saying that technology is creating a generation of students whose brains were ‘wired’ for distraction.

“Those in the habit of looking at their phone while studying will find the time needed to complete a task grows considerably,” he said.

“Their intensity, level of concentration and engagement will diminish markedly as their brain grows tired from switching from one thing to another and back again.”

Mr Francis, whose various roles in Queensland schools include Deputy Head and Year Level Coordinator, said the book also covered ways to manage study stress and aimed to debunk a tendency of student culture to see stress as an entirely negative phenomenon.

“It was Dr Nagel who first started my interest in many of the topics in this book when I was a Graduate Diploma of Education student in his class at USC in 2009,” Mr Francis said.

“One section challenges the students to think about how their brains learn and how they can tailor their study to better suit this,” he said.

“This includes thinking about diverse matters, such as attention spans, the importance of sleep, social learning, the positive impact of exercise and the negative impact that multi-tasking has on learning.”

The topics also draw parallels with other high-performance environments such as sport and music, including the importance of setting goals, effective practising, positive mindsets and building routines to support performance.

Mr Francis said the strategies he promoted were based on his research, observations and discussions with students he had taught, and his experiences while completing two undergraduate and four postgraduate degrees, including a Master of Financial Planning at USC.

“At one stage, I was enrolled in both an undergraduate and Master degree at the same time so instead of completing the usual four subjects as a full-time load for a semester, I completed 11,” he said.

“It forced me to think about how we study efficiently and sparked my interest in how we can get the most out of our learning endeavours.”

The book is published by Hawker Brownlow Education. https://www.hbe.com.au/hb6203.html 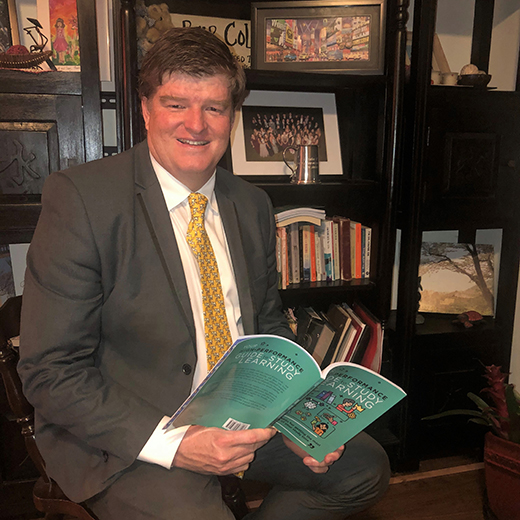 A physiotherapist who specialises in helping people recover from strokes and the leader of a national provider of laundry and shower services for the homeless have been named USC’s Outstanding Alumni for 2021.

Fashion secrets to be revealed at free lounge lecture

Find out what it takes to dress rock stars such as Lady Gaga and design clothes for leading fashion houses at a free USC lounge bar lecture at Buderim.