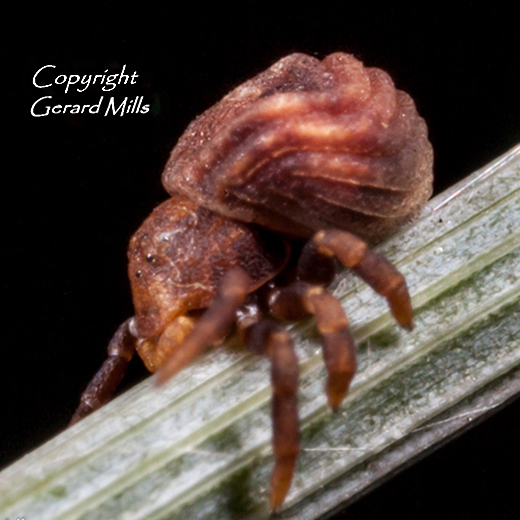 A keen wildlife photographer has snapped images of a rare, tiny spider on the USC campus that are putting arachnologists in a spin.

Gerard Mills, whose daughter is studying Arts at USC, took photos of the Corynethrix obscura in regrowth bushland near a lake on the eastern side of the University’s grounds.

“The spider is so rare, apparently there was no known photograph of the creature,” Mr Mills said. “By the way, the size of this little fellow is less than 2mm.”

In searching for details about the tiny creature, Mr Mills was surprised by the excited response he received from Dr Ron Atkinson, who has a web-based “find a spider” guide to help people identify spiders of South-East Queensland.

“That spider of yours is a rare find and your photo of it is excellent,” Dr Atkinson wrote to Mr Mills. “I know exactly what it is but have never been able to find photos of it anywhere in books or on the Internet.

“It belongs to the family Thomisidae and its scientific name is Corynethrix obscura. I have copies of the only drawings I have seen of this species, which can be found (with great difficulty) in both Queensland and NSW.”

Dr Atkinson is a retired academic whose research interests included spiders and the toxicology of their venom.

His website entry on Corynethrix obscura now features the images taken by Mr Mills. It states: “little is known about the natural history of this species because it is so rarely found in the field”.

USC’s Lecturer in Wildlife Ecology Dr Scott Burnett said the discovery of the previously unphotographed spider has highlighted the importance of the USC campus as a wildlife habitat.

“It also reminds us that there is so much that we still don’t know about the biodiversity of the Sunshine Coast, let alone the nation and the planet,” he said.

“It makes you wonder what else is out there, and what undocumented species we could be losing from our local bushlands, without ever capturing images of them, let alone even knowing that they exist.”

Mr Mills said although it was a thrill to have taken possibly the first photos of this spider, he was completely unware of the significance of the photos at the time.

“In fact, when I downloaded the images, I initially thought it was a species of weevil,” he said. “I did not get a close look till later when I went to categorise the creature and I thought it might be a spider.

“Around five hours of hunting on the internet proved fruitless. So I contacted Dr Atkinson who got back to me very quickly with a request to add the picture to his website.”

University of the Sunshine Coast students have helped uncover a snake species in Noosa National Park previously not recorded in the area.

USC students have jumped at opportunities to either celebrate or enhance the University's status as a wildlife reserve.

Students delight in caring for sun bears in Borneo

Three USC Environmental Science students recently had the wildlife experience of a lifetime when they spent a month volunteering at the Bornean Sun Bear Conservation Centre in Malaysia as part of their studies.