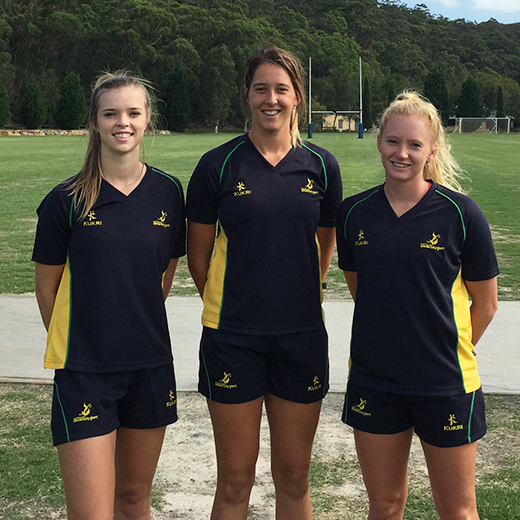 Three USC students have put themselves in contention to represent Australia at next year’s World University Championships in Wales, following strong performances at the recent 2015 National Rugby Sevens tournament.

Paramedic Science students Erica Fowler and Sammy Thornton and Property Economics and Development student Samantha Boholt were in the Australian Universities squad that took on state representative teams at the national event at the Sydney Academy of Sport earlier this month.

The students held their own in the tournament that featured Australia’s finest rugby sevens players and enabled selectors to assess their progress toward national selection. The Australian Universities team finished third in Division A after one win and three losses.

All three USC students have declared selection for the World University Championships to be their immediate goal.

Boholt, who plays local rep sevens rugby alongside Fowler and Thornton at the Sunshine Coast Stingrays, says representing Australian Universities would be a great honour and a wonderful opportunity.

“If I can make it to the uni championships in Wales it would be awesome,” she said.

While Boholt also plays 15-a-side club rugby with Fowler for the University of Queensland, she clearly prefers the sevens format.

“Being more of a runner, my game is more suited to sevens rugby over fifteens, so hopefully that helps me in making the Australian team,” she said.

USC Occupational Therapy student Grace Wilkins also competed in the 2015 National Sevens Rugby tournament, playing in the Queensland White team. Unfortunately Wilkins was injured in her second game and could take no further part in the competition.