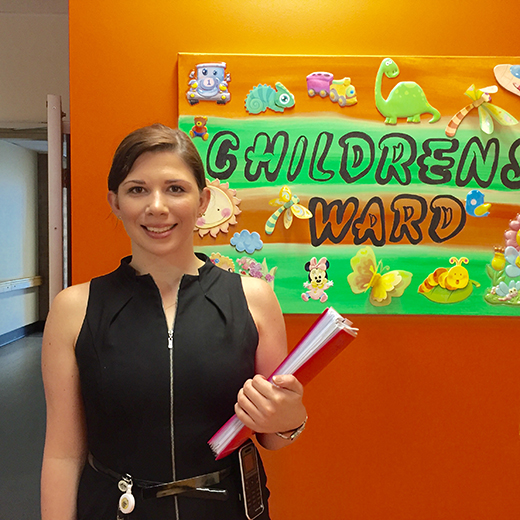 A Nutrition and Dietetics degree has enabled a University of the Sunshine Coast graduate and former Australian open water swimming champion to glide into a career helping sick children improve their health through diet.

Amy Thompson, 27, of Alexandra Headland, is now a Senior Clinical Dietitian at Caboolture Hospital, mainly practising in the area of paediatrics.

It’s another milestone for the 2013 Bachelor of Nutrition and Dietetics graduate, who enrolled at USC after completing Year 12 at Matthew Flinders Anglican College.

“My active lifestyle led me to study nutrition and dietetics, and I’d always enjoyed working with children,” said the former learn-to-swim teacher at Kawana Aquatic Centre who won gold and silver when she represented Australia at the 2008 Oceania Championships.

“My job at Caboolture Hospital is rewarding. It involves assessing and guiding the nutritional management of complex paediatric inpatients and outpatients, while also managing the nutritional care of adults with eating disorders. Other tasks include supervising students and completing research and quality work, which I really enjoy.”

Ms Thompson, who recently returned to USC as a guest lecturer, said her professional future was shining even before she graduated from university.

“My practical placements in the final year of my degree led to two locum offers and I took one at Nambour General Hospital,” she said.

“Some months later I was offered a graduate position as a clinical paediatric dietitian at the Royal Children’s Hospital and I relocated to Brisbane, working there for two years.

“I gained experience in areas ranging from metabolics and surgery to the burns unit and immunology. I was fortunate to write three statewide clinical guidelines after obtaining my Certificate in Paediatric Nutrition through the Melbourne Royal Children’s Hospital.”

“The business has become successful enough for me to recruit another specialist dietitian,” she said.

“I’m so glad I decided to stay on the Coast to study at USC. It initially enabled me to keep training with my swimming coach while having the support of my family and a flexible teaching team.

“I received a couple of sporting awards at USC but I retired from swimming in the last year of my degree when I received a scholarship to attend placement and realised that was where I wanted to excel.”

Ms Thompson is believed to be the first USC Nutrition and Dietetics graduate to be offered a position at the Brisbane Royal Children’s Hospital.

“I hope that I’m opening doors for future graduates,” she said.