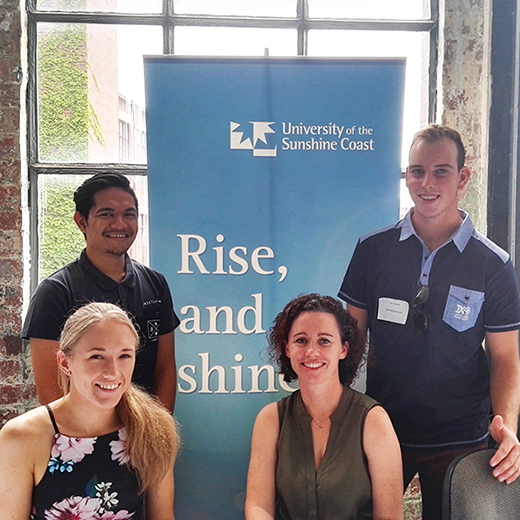 A team of University of the Sunshine Coast students has made the finals of a national competition to design sustainable engineering solutions for a refugee settlement in Africa.

The USC team this week travelled to the Showcase event of the Engineers Without Borders (EWB) Challenge in Melbourne, where their idea was one of only 14 shortlisted from more than 1,000 submissions.

Ms Gorring said they gained insight into the type of environment and conditions by taking a virtual “walk-through” of an African village using the immersive 3D visualisation equipment in USC’s Engineering Learning Hub, including the CAVE2TM.

More than 9,000 Engineering students from Australia and New Zealand entered the EWB Challenge, attempting to tackle problems of health, transport, shelter and water in a developing country.

Ms Gorring said the USC project recycled older, unused bicycles to create a trailer that could transport crops or people – a major issue in the poor community.

“In the refugee settlement, pushbikes are the main form of transport, whether that’s to take goods to market, fetch water or transport children or elderly people,” she said.

“We wanted to create a safer trailer that would stop the residents carrying heavy, unbalanced loads, which could cause crashes or damage their crops.

“In using the wheels, frames, cogs and chains from old bicycles to build trailers, we were proposing to use things that might be seen as waste in the Western world, but can still have a very valuable use.

“It was a fantastic way to get hands-on experience and see the difference that engineering can make. We got great feedback from other students and the judges at the showcase.”