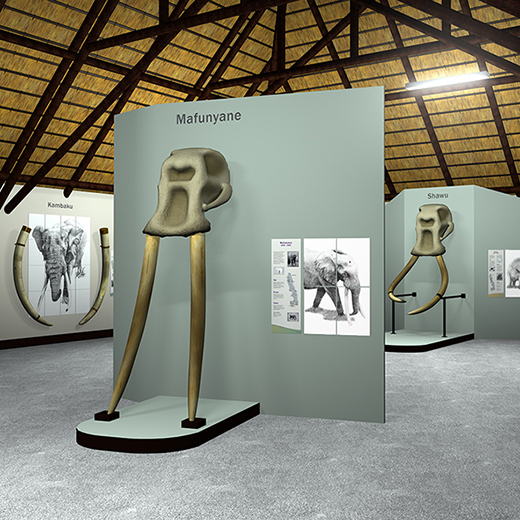 An exhibition of innovative student design works that will soon take pride of place in the Letaba Elephant Hall in South Africa will be officially opened at the University of the Sunshine Coast Gallery at 6.30pm tomorrow (Thursday 1 December).

Media and the public are welcome to inspect the intricate pencil drawings, static displays, photography and 3D imaging works produced by more than 30 USC Design students to provide information about elephants at the famous interpretive centre at Kruger National Park.

After the USC exhibition finishes on 22 December, the materials will be transported and installed in South Africa, with the new Letaba Elephant Hall to be launched in March 2017.

Lecturer in Design Kevin Todd said the USC project would be the first major update of the elephant hall since it opened in the late 1970s.

He said the project with South African National Parks had provided many great opportunities for Design students since 2011, with almost a dozen students completing placements at Kruger National Park during that time.

The USC Gallery is located at the University campus on Sippy Downs Drive, Sippy Downs. It is open free to the public from 10am to 4pm Monday to Saturday and closed Sundays and public holidays.

Students gearing up to graduate this year from two of USC’s most popular degrees have gained vital job information direct from some of the biggest employers in their industry.

Caboolture graduate gears up for job in Japan

A year in Japan as part of his studies has USC graduate Levi Ormiston of Caboolture excited about returning there in July for a new job.