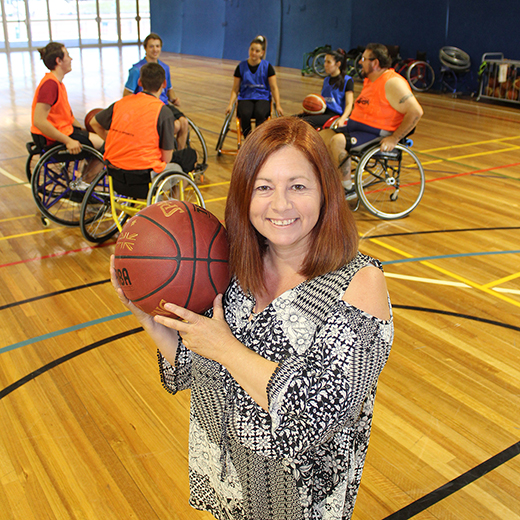 Ms Hill started volunteering with the club, based at USC Stadium, after a chance meeting with a parent through her son’s school eight years ago.

Ms Hill said she realised the incredible mutual benefits of able-bodied people such as her own family members making connections with people who had disabilities.

She said the award was unexpected and exciting, especially given that she did not have a university degree.

“It’s my son James Hill (Suncoast Spinners coach) who’s at university,” she said. James, who is studying a combined degree in Education and Recreation and Outdoor Environmental Studies at USC, will be among family watching Ms Hill from the audience at the ceremony.

“It is a great honour,” she said. “I think it reflects the need and drive for more inclusive social sport across the region and the country. I hope it will help create more opportunities.”

USC Vice-Chancellor Professor Greg Hill (no relation) said Ms Hill had tripled the club’s membership and created opportunities to employ people with disabilities for programs such as coaching local school children to play wheelchair basketball, irrespective of their abilities.

Professor Hill said the success was fuelled by her successful grant applications, including two for NDIA funding worth more than $180,000.

“The Sunshine Coast is now a leader in reverse integration in wheelchair basketball and this is exemplified each January when Caloundra Indoor Stadium hosts the largest such tournament in Australia – which Sharon has helped organise since 2015,” he said.

“Her vision mirrors USC’s and has already expanded to Hervey Bay in the north and Morayfield in the south.”

Ms Hill said the club had developed many invaluable connections with USC, including its current president Bridie Kean, a Public Health academic and Paralympic athlete, and the regular involvement of Occupational Therapy academics and students on placement.

Maryborough’s Paul Hoggard has been named USC’s top graduating Accounting student and received a University Medal for his academic success.

USC Psychology student Helen Hall will receive the prestigious Chancellor’s Medal at her graduation ceremony on Friday 28 September for her research into the growing epidemic of parental loneliness and for her extensive volunteer work to help alleviate it.