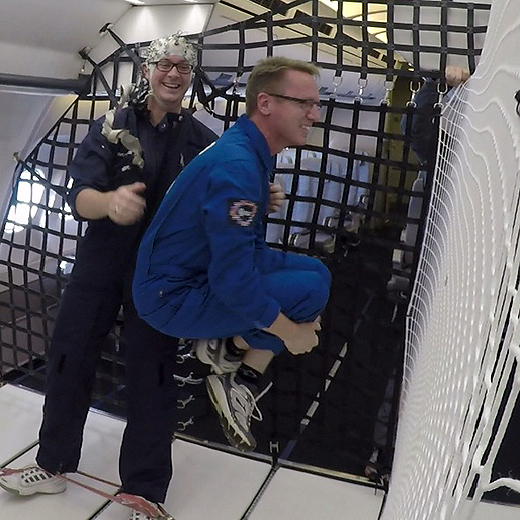 University of the Sunshine Coast academic Dr Chris Askew has spent the past week defying gravity – all in the name of research.

The Associate Professor of Exercise Physiology has just participated in a parabolic flight over Bordeaux, France, in which he experienced periods of weightlessness as the plane he was in conducted a series of stomach-churning manoeuvres.

Working with researchers from the German Sport University and European Space Agency, Dr Askew ran experiments on how changes in gravity affected people’s abilities to conduct fine motor and cognitive tasks, as well as their brain and cardiovascular activity.

See the YouTube footage of Dr Askew and participants experiencing weightlessness on the flight.

Dr Askew said despite participating in three previous parabolic flight campaigns, the sensation of floating around an aircraft remained incredible.

“It’s the feeling of when you lose your stomach over a bump in the road or on a rollercoaster, but the feeling doesn’t go away – it stays with you for 22 seconds,” he said.

“We float around, usually behind the study participants, making sure the data is sound and the person is okay, because the frequent changes from hypergravity (2G) to zero gravity often causes motion sickness.

“If everything goes to plan, we use the last five manoeuvres as our ‘play parabolas’, just enjoying the weightlessness and throwing things like bananas and our phones round.”

Dr Askew said the research had two purposes – firstly, to determine if exercising before a complex task can reduce stress and improve performance, and secondly, to determine the role that brain blood flow plays in brain activity and cognitive function.

“The German Sports University is investigating the impact of physical and mental stress in astronauts, but importantly, this data can also be used for health experiments here on Earth,” he said.

“As we switch between 2G and zero gravity on a parabolic flight, we increase and decrease brain blood flow in a way that you just can’t do in an ordinary lab situation.

“In ageing and cognitive conditions like Alzheimer’s there is a decrease in blood flow to the brain, so this data can help us understand the relationship between blood flow and brain activity in those contexts.”

USC has supported the research collaboration with the German Sport University since 2006.