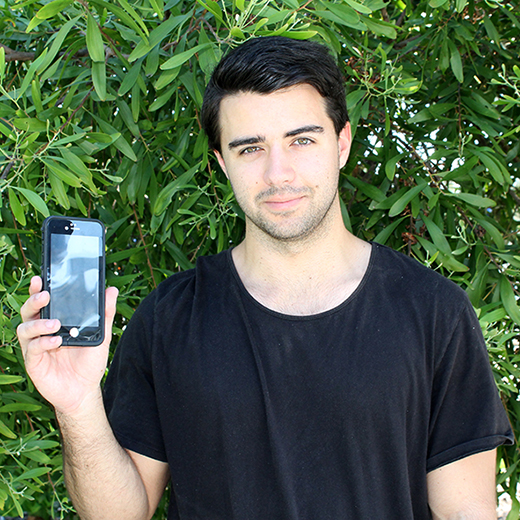 Holding an iPhone in the rain, day and night, to research rainfall intensity for his University of the Sunshine Coast Honours degree has helped Jordan Andrews claim the top spot at Engineers Australia’s 2015 Michael Woodhouse Undergraduate Award Evening.

USC students gained first and second at the recent awards, hosted annually by the Queensland Water Panel, with fellow Bachelor of Civil Engineering Honours student Scott Roy taking second for his innovative floating wall for use in flood mitigation.

Jordan, 22, a Siena Catholic College graduate from Mooloolaba, won for his thesis, ‘Design of a Rainfall Software App: Analysis of digital audio recordings of rain to determine intensity’.

“It’s the latest step in a project supervised by Dr Helen Fairweather to create a software app that can be used by people everywhere to measure rainfall intensities and locations, then upload the data to the internet,” he said.

“I put my iPhone 6 in a waterproof case and used it like a digital audio rain gauge at different times of the day and night, and even while it was submerged in water.

“After recording the raindrop sounds, we used two methods to determine intensity and then compared the results to real recorded rainfall intensities provided by the Sunshine Coast Council.

“We were surprised by how well one particular method worked. The findings indicate that audio analysis techniques can determine rainfall intensity to within 17.5 percent accuracy of real rainfall data.

“Further research also could be conducted on the new model iPhone 6s which have pressure sensitive screens.”

Jordan said the project aimed to create longer-term and more widespread records of rainfall events to contribute to research and action on issues such as climate change and flooding.

Dr Fairweather, who is a Senior Lecturer in Environmental Engineering, said she was delighted that two USC students took first and second in the awards, out of 14 nominations from universities around Queensland.

“Both Jordan and Scott gave very polished presentations. This success demonstrates the novel and innovative research our engineering students are doing at USC.”

The annual event showcases work from the most promising future water engineers. Only five university students were invited to present their results.