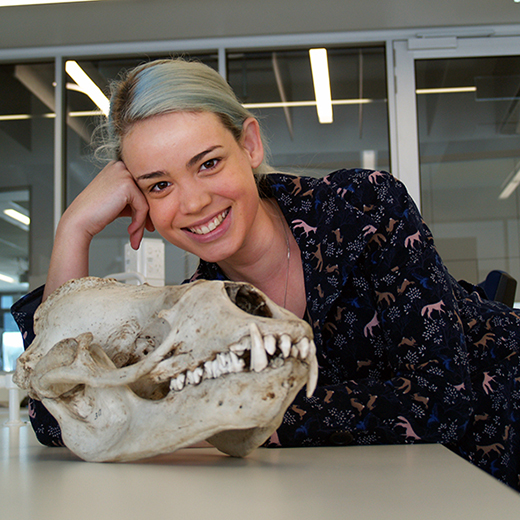 A former OP1 student of Mountain Creek State High School who fast-tracked her University of the Sunshine Coast degree has launched an exciting career in Antarctic science – in Tasmania.

Veda Malpress had to miss her recent USC Graduation Ceremony, where she was awarded a Faculty Medal for her grade point average of 6.73 out of a perfect 7, because she had already started a degree at the University of Tasmania’s Institute for Marine and Antarctic Studies (IMAS).

The 19-year-old completed her Bachelor of Science (Accelerated) six months early and moved to Hobart in July after she won a $9,000 scholarship for an Honours degree on flora and fauna far removed from the Sunshine Coast.

“My research is a mix of ecology and oceanographic modelling, examining the characteristics of big holes in the Antarctic sea ice called polynyas,” Veda said.

“Not much is known about these open water regions because they’re so isolated, but they are vital foraging grounds for marine predators such as elephant seals.”

Veda, who was accepted into USC’s Dean’s Scholars Program for high-achieving science students, said she hoped her research would help address the projected impacts of climate change on the world’s polar regions.

“I’ve always loved the mega fauna of the Antarctic and Arctic and these regions are so critical to the world’s environment. Now I’m having the most amazing experience at an institute filled with experts in this field, and I’m hoping to join a research cruise to the ice next year.”

Veda, who received a Renouf Family Scholarship at USC, said she benefited from a smooth transition from high school to university without leaving home.

“When I started science at USC, my broad interest was conservation,” she said. “The experience and the knowledge of the academics, and their one-on-one help, prepared me for assessments and developed my critical skills.

“Looking ahead, I’m hoping to do a PhD in conservation management.”

The project involving Veda is a collaboration between the Australian Antarctic Division, IMAS and the Antarctic Climate and Ecosystem Co-operative Research Centre. It uses tracking data of elephant seals collected under the Integrated Marine Observing System, supported by the Australian Government.