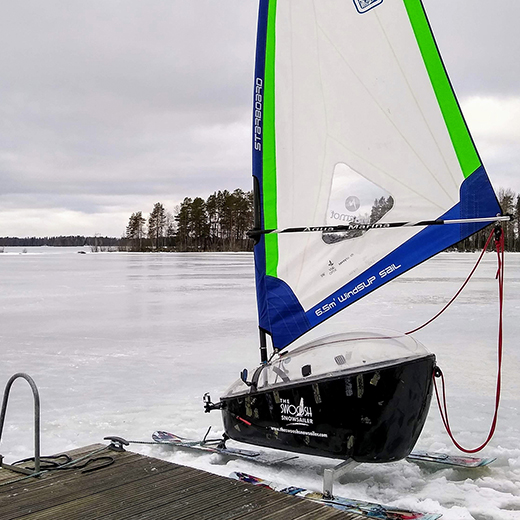 He goes for it anyway.

USC’s intrepid academic Dr Adrian McCallum, who specialises in the geomechanics of snow and ice, recently returned from his adventure with Brisbane entrepreneur Charles Werb to the five-day Ice and Snow Sailing World Championships.

The only two Australians at the event, they took the chance to showcase the capabilities of Mr Werb’s wind-powered Snowsailer vehicle, despite conditions that were warmer and calmer than expected, even after the race was moved from Estonia to Lestijarvi in Finland.

“Once the wind came up, away we went, for miles upon miles across the frozen ice,” said Dr McCallum, a Senior Lecturer in Geotechnical Engineering.

“It was an exhilarating experience and I was thrilled to be travelling in the capsule at speed for the first time.”

The Snowsailer, which can reach more than 60km/h, is a person-sized capsule with a large sail on top and three snowboards with runners underneath.

“It’s totally wind-powered, environmentally friendly and protects you from the elements, and I’m hoping I can sail with Charles on an Antarctic expedition, carrying my ground-penetrating radar to measure snow and ice thickness,” Dr McCallum said.

“Researching the polar regions is vital because they are the ‘canary in the coal mine’ for climate change.”

The Aussie team mixed with more than 90 competitors from 14 countries at the event presented by the World Ice and Snow Sailing Association. Racers used sleds powered by windsurfing rigs, hand-held sails and tethered kite sails that were able to operate in lighter winds.