An early morning commute from Hervey Bay to USC’s Sunshine Coast campus for a day of lectures before returning in time to put her children to bed is part of a new routine for former hospitality manager Kristy Benson.

"Being a single mum to two young kids and juggling full-time university, a part-time job and volunteer work is crazy at times, but I wouldn’t have it any other way,” said the 29-year old who began a Bachelor of Midwifery at USC this semester.

Having the self-belief to start university was the first step for Kristy who completed a semester of Nursing Science at USC’s Fraser Coast campus last year as a pathway to the popular Midwifery program.

“When I left my position in hospitality I was terrified that I wasn’t academic, but I pushed through and decided to throw everything into studying,” Kristy said.

“I went from being someone who believed that they weren’t smart enough to go to university to finishing my first semester with a perfect grade point average of 7 out of a possible 7.”

Based on her outstanding results, she was able to transfer to the Midwifery degree, which is offered at USC’s Sunshine Coast campus.

“I am beyond thrilled to be studying with others who have the same passion as me and to learn from exceptionally skilled and knowledgeable Midwifery lecturers,” she said.

Ms Benson said her experience of pregnancy, birth and early motherhood had profoundly changed her life path and passions.

“Since having my boys, I have been involved with community birth and breastfeeding groups and I have realised that midwifery is the career that I am made for.”

She said attending lectures and tutorial across USC’s campuses at the Sunshine Coast and Hervey Bay was “tiring and a bit tricky” but possible with the support of family and friends, and USC’s student services networks.

“The help I receive at USC is truly exceptional and the Student Services and Engagement staff are just so giving of their time and knowledge,” she said.

“I am also very grateful to have received an equity bursary for the past two semesters, which has been so helpful to me, particularly with the extra cost of travelling this year.”

USC Equity Bursaries are one-off payments of $1,000 each semester to eligible students to assist with the costs of study.

Ms Benson said she had two key recommendations for those contemplating university study.

“Ask for help. You need to put in the hard work yourself, but you have a team of peers and university staff around you who really want to see you succeed.”

She also encouraged students to get involved with university life. “I love working with the student groups and getting involved in the activities, which are there to help you to chill out, connect and build relationships with others.” 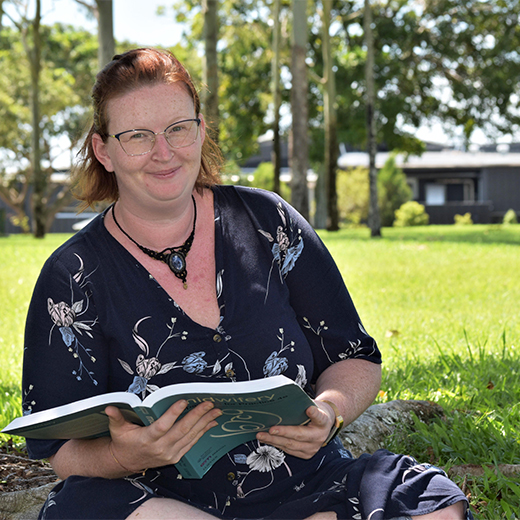