Plans to establish a turtle rescue, rehabilitation and research centre in the Wide Bay region are gaining momentum, as fears grow that hundreds of turtles are in danger of starving to death in coming months.

University of the Sunshine Coast  marine biologist Associate Professor Kathy Townsend says researchers and turtle rescue groups have identified a vital gap that needs to be filled to give threatened turtles the best care and the greatest opportunity for survival.

"We now need help to turn this proposal into a reality,” said Associate Professor Townsend, who leads global research into marine conservation and human impacts on the marine environment.

“Having a facility at Hervey Bay will allow us to triage rescued turtles in need of care and conduct vital research into the general health of our threatened turtle populations and other sea life, which is not just important for this region, but also globally.

"It would act as a central hub for community and educational activities in the Fraser Coast region and attract early career researchers and HDR students to the region."

The community is being asked to help protect the region’s endangered marine creatures and support rescue efforts by backing a special Giving Day campaign launched yesterday by the University of the Sunshine Coast.

All Giving Day donations will directly support sea turtle facilities, research and rescue programs conducted by UniSC. Donations can be made for the next month.

The Sandy Michell Legacy Fund will also match all donations to sea turtle conservation, up to a total of $25,000. An additional $25,000 will be unlocked if 150 or more donors are reached.

“By donating, people have a real opportunity to do something that will tangibly improve the plight of sea turtles in our local region and have a long-term impact at a state, national and international level for sea turtle conservation and care,” said Associate Professor Townsend.

Sea turtles are fighting for survival

The emergence of a mystery ‘soft shell’ disease in turtles in local waterways, and a massive increase in sick and stranded turtles in recent months, has highlighted the urgent plight of the marine reptiles.

“This is stretching the capacity of our rescue volunteers here and the staff at Australia Zoo Wildlife Hospital, which at three hours away, is our closest treatment option for sick and injured sea turtles,” said Associate Professor Townsend.

Between January and  August, 91 turtles were rescued and transported to the Australia Zoo Wildlife Hospital at the Sunshine Coast for treatment, compared to only 12 for the whole of 2019. Many more in poor condition had to be left behind.

“Many turtles are starving. In some areas, only one percent of seagrass beds – the main food source for turtles – remain after being smothered by sediment from recent heavy rain and flooding,” she said.

“Other turtles are being impacted by pollutants that come with flood waters, including the large amounts of plastic and rubbish that gets swept out of storm drains.

“Since turtles can’t tell the difference between food and rubbish, many end up ingesting plastic and other marine debris, which causes them to suffocate, or get entangled in plastic loops, bags and even disposable face masks.” 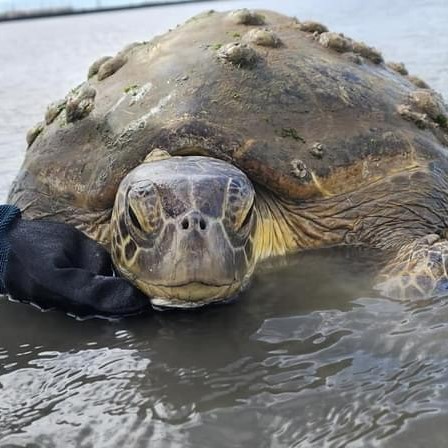 A new short course is offering the chance to join a global online classroom for a deep dive into the amazing world of animals – and to better understand the impact we are having on their lives.