Humanitarian set to shine at USC - University of the Sunshine Coast, Queensland, Australia

Humanitarian set to shine at USC

At just 17 and with two humanitarian aid trips to Cambodia under her belt, it’s true to say that former Maroochydore State High School captain Rubie Orman enjoys adventure and a challenge.

That could be why the OP2 student from Mudjimba has enrolled in USC's demanding Deans Scholars Program, which gives high academic achievers the chance to fast-track a combined degree in Science and Science Honours.

“I have always been incredibly interested in science and being able to complete a four-year degree in just three was an opportunity that I could not pass up,” she said.

Her study at USC will give her a solid grounding in science and health, will include a research project, and lead on to either a career in animal ecology or to further study in the field of medicine.

“On both trips to Cambodia, I stayed in an orphanage and taught the children basic English and I also got to travel to poverty-stricken villages and help build houses for the homeless,” Rubie said.

“I really enjoyed being able to help those in need and, if I choose to become a doctor, I will be involved in lots of humanitarian work.”

Rubie’s family has been involved in the Mudjimba Surf Life Saving Club for many years, with Rubie a former nipper age champion of the club.

An estimated 3,900 new students will begin studying at USC this semester, with Orientation Week to be held from 23-27 February before classes begin on 2 March.

For details about applying to study, contact the University on 5430 2890 or go to how-do-i-apply. 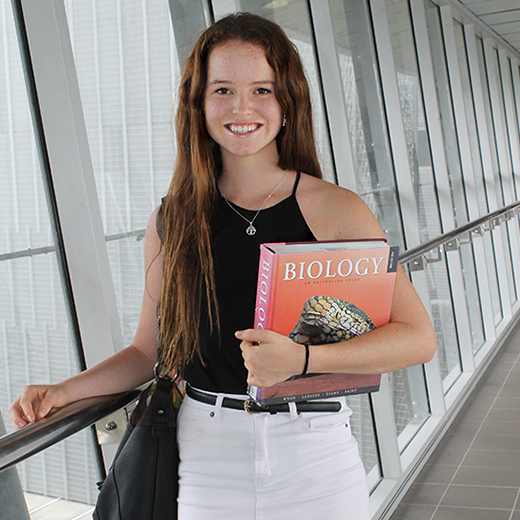 A second-year USC Environmental Science student has won a statewide award for a project that found introducing a type of algae to fertilised soil could boost the growth of radishes.