Exercisers sweat it out for USC study - University of the Sunshine Coast, Queensland, Australia

Exercisers sweat it out for USC study

A University of the Sunshine Coast researcher is investigating whether recent converts to physical activity can hold their own against veteran exercisers.

PhD candidate Gavin Buzza recently tested the fitness levels of 120 volunteers as part of his three-year project examining how the body, muscles and brain tissue utilise oxygen during exercise and how this could change with ageing.

Each participant had to undergo multiple cycling tests at the USC Sippy Downs Exercise Physiology laboratories, during which Mr Buzza measured their maximum oxygen intake (VO2max) and how much oxygen was being used by their brain and leg muscles.

The project is comparing the exercise capacity of those who have trained for less than two years with long-term exercisers of more than five years, as well as looking at how gender and age can affect oxygen levels.

Mr Buzza said most published research in this area focussed on the differences between sedentary people and experienced athletes.

“To tell me that someone who has trained has a higher VO2max than someone who does no exercise is a no-brainer,” he said.

“I wanted to find out if someone who started exercising fairly regularly and intensely could get up to a comparable level to someone who had trained over the long term.

“We would expect the person who had trained for 5-10 years to be fitter, but I want to find out by how much and if that relates to more efficient oxygen use by their muscle tissue.

“We can also find out if the gap narrows when it comes to age groups, with younger people potentially able to reach a higher level of fitness in less time.”

Senior Lecturer in Exercise Physiology Dr Colin Solomon, who is Mr Buzza’s supervisor, said the research was using cutting-edge infrared scanning equipment to measure the participants’ oxygen levels in the brain and body – technology that is unique to USC.

“Gavin applied five different near-infrared spectrometers (NRIS) to different leg muscles and on the skull, which is a non-invasive method to measure oxygen being used by the tissue,” he said.

“To have five different portable NRIS devices in our lab is internationally unique and it means we can simultaneously test how different muscles and the brain respond during exercise.

“The public response to this study has been extremely positive, with many members of the community keen to participate.”

Mr Buzza said his project’s insights into aortic health and ageing could help to improve the assessment of chronic medical conditions. 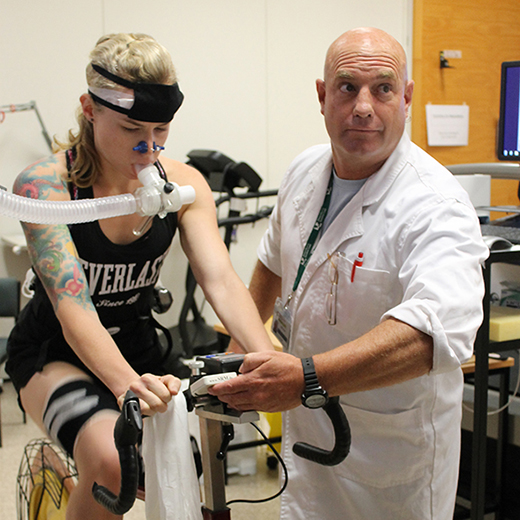