Little-known habits of the iconic native animal illustrated on Australia’s five cent coin have been unveiled in new research led by the University of the Sunshine Coast.

A study led by USC Lecturer in Animal Ecophysiology Dr Christofer Clemente has offered new clues to the movement habits of the short-beaked echidna.

One of the findings, published today in an article on ‘The private life of echidnas’ in the Journal of Experimental Biology, is that each animal could be responsible for aerating up to 200 cubic metres of soil each year – a function critical for soil nutrition.

To read the paper go to http://jeb.biologists.org/. A video further explaining the research can be found at: http://ow.ly/Lcg8305jB1n.

Dr Clemente said the team was amazed at the scale of each echidna’s soil turnover, given that most echidnas weighed under five kilograms.

“If you have 12 echidnas, they are moving the volume of an Olympic-sized swimming pool of dirt a year,” he said. “They spend about 10 percent of their day digging.

“We knew that burrowing echidnas had a number of positive benefits for the ecosystem, by releasing nutrients and reducing erosion, but what no one knew was the amount that echidnas were digging.

“Soil aeration is absolutely critical to the overall environment, by releasing nutrients and reducing erosion and run off, and this is the first time we’ve discovered just how much the humble echidna is contributing to that.”

As the most widespread Australian mammal after the house mouse, echidnas were a keystone species in ensuring the survival of plants and animals across the continent.

“These guys live in every single habitat, from deserts to the forests of Tasmania and all the way to the tropical North,” he said. “It means that their behaviour is having a huge impact.

“Australia used to have a lot of animals that dug up soil, like bilbies and bandicoots, but we’ve lost almost all of them except for echidnas.

“It’s almost like these animals are the last line of defence for Australia’s ecosystem health.”

Dr Clemente said the accelerometers, which were created by University of Queensland engineers, had acted as “FitBits for echidnas”.

“If we followed an echidna around all day, it wouldn’t behave naturally, so we glued accelerometers, GPS devices, and temperature and light loggers to their spines and let them go,” he said.

“It was a little bundle about the size of a watch, and it gave us this private peek into the life of an echidna.

“The challenge came in recapturing the echidnas, because it turns out they don’t like to be caught a second time. They would hear you coming and start running through thick bush, so we spent a lot of time with our heads in caves or tree hollows.” 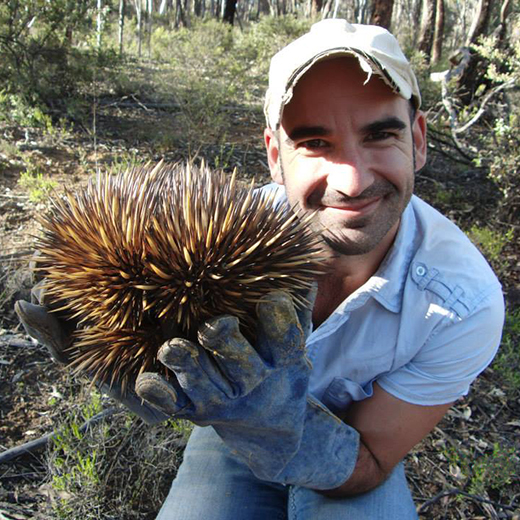