A member of USC’s two winning teams, men’s football and futsal, the Sippy Downs 24-year-old said the performances were a result of all players working together on-field and socialising together off-field.

The soccer victory was particularly sweet as he shared it with USC Business/Science (Sport Management) student Jason Myers, 26, of Kippa-Ring, a good friend Mikey met soon after arriving on the Sunshine Coast from Weipa in 2012.

“I’m graduating in September with a Bachelor of Social Science (Psychology) and one of my favourite courses was studying motivation and emotion because I could relate to it, in terms of being driven to play sports,” Mikey said.

Mikey, who won a national Golden Gloves light heavyweight title in 2015 and is aiming for Commonwealth Games trials, appreciated USC’s support for high performance student athletes as he juggled a degree, boxing commitments, and jobs in social work and security.

“If you really want to do something, you just fit it all in,” he said. “It was good to talk to other HPSA students at the University too, so you realise you’re not out there by yourself.”

He said social sport at USC helped form friendships and led to exciting events such as the Northern University Games.

“We pulled a rabbit out of the hat in the futsal final against UQ,” he said. “They’d slaughtered us in an earlier stage, but we worked as a team in the final and won 2-0.”

USC last week took 144 athletes to compete in nine sports at the Games in Rockhampton and Yeppoon, placing fifth in the overall medal tally.

In addition to the two gold, USC earned silver in golf and five bronze in men’s and women’s touch football, women’s volleyball, mixed netball and golf.

“I’ve been to 12 University Games and got silver in beach volleyball and bronze in touch football, but I’m close to graduating so this was my last chance for gold,” he said. “My highlight was assisting in the first goal. That final whistle was the best moment.”

The graduate of Southern Cross Catholic College at Scarborough said sport marketing had been one of his favourite subjects, and a work placement with USC Sport a highlight.

USC Sports and Operations Coordinator Gary Moore said there was fantastic camaraderie among the 1,600 student athletes from across Queensland and northern New South Wales at the Games, organised by Australian University Sport and hosted this year by Central Queensland University. 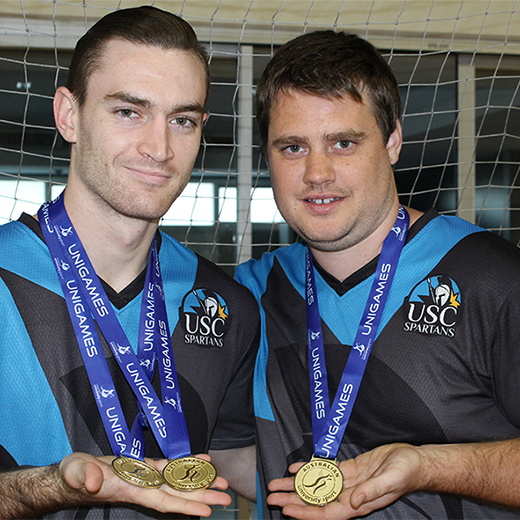