Three students from the Gympie region have gained USC awards at a ceremony that celebrates the University’s outstanding performers in arts, business and law.

Ms North, 36, who is in the final semester of a Bachelor of Commerce (Accounting) at the Gympie campus said the awards were validation that she had made the right decision to enrol at USC and pursue a career as an accountant.

“I have worked in the accounting industry since leaving Caboolture’s Tullawong State High in 1998, but put off starting a degree because I kept doubting myself,” said Ms North.

“It was not until I moved to Gympie about four years ago, and heard a radio ad about the new USC campus opening, that I decided to do a Tertiary Preparation Pathway subject, which gave me the confidence I needed to begin the Commerce degree.”

For the third year in a row, Bronte Newcombe, who is completing a combined Business and Commerce (Financial Planning) degree, has shone in USC’s Faculty of Arts, Business and Law Awards and Prizes ceremony.

The former Victory College student has received a number of faculty awards since starting her studies at USC Gympie, including three awards last year. 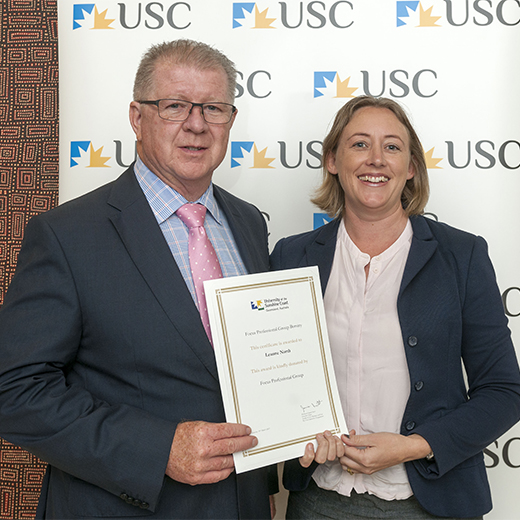