The students are assisting Raphael McGowan of Mooloolaba who, for the past 18 months, has been developing bakslap – a device that enables the application of sunscreen to hard-to-reach areas of a person’s back and body

Mr McGowan – a USC Business graduate – said his mission to get the applicator to market received a strong boost in February this year when six of the interns sought work placements with him as part of their degrees.

A seventh intern, who is completing a Masters of Business Administration, began work with Mr McGowan last year.

“Because most of the interns are aged 18-20 years old, they’ve given me a lot of insight in how to appeal to that age group,” Mr McGowan said.

“In exchange, they’ve benefited from my eight years of corporate experience, which I’ve been able to use to mentor them and help them achieve their own goals.

“Having these interns is actually helping me get this product to market quicker.”

Mr McGowan developed the idea for the hand-held sunscreen applicator after his sister Tess died from melanoma in 2012 when she was just 31. The keen surfer has pledged to donate $1 from every sale to Melanoma Institute Australia to create a legacy for his sister.

A crowdfunding campaign the interns helped organise will be launched on Tuesday 26 June at the Alexandra Headland Surf Club. The aim is to raise money towards the first release of the product in return for being able to pre-purchase your own bakslap at a discounted price.

The first stages of production are already underway, with bakslap expected to be ready before summer this year.

“Part of my reason for engaging with the students is that when the product gets to market, I am hoping to employ students who have been working with me because they already know the brand and know what we’re about,” Mr McGowan said.

The entrepreneur, who is based at the Innovation Centre, is encouraging other local businesses to give interns hands-on experience.

Bachelor of Business Management student Daniel Behn said doing an internship with bakslap had provided him with a practical idea of what it was like to work for a start-up company.

“For students keen on receiving some real-world experience, it’s worthwhile interning with a company or brand that shares the same ideals with you,” Daniel said.

For more information on the launch event and bakslap, visit www.bakslap.com 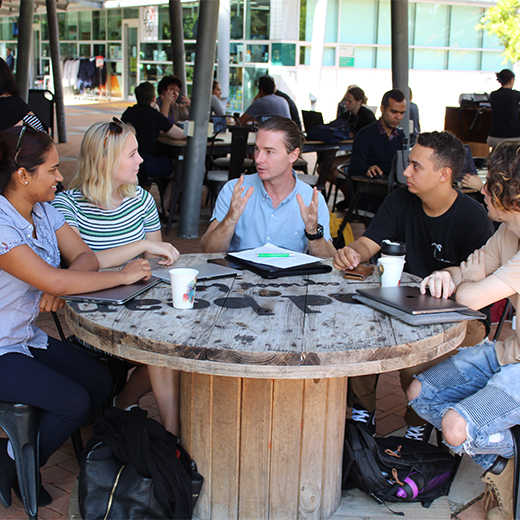