USC PhD candidate Caitlin Smith’s research will build on previous studies that have confirmed that about half of the world’s sea turtles have eaten plastics.

“We know that marine turtles are dying from ingesting plastic particles,” Ms Smith said. “However this is the first study to explore the toxicity of these particles and the health risks to turtles from chemical and heavy metal exposure.”

The research will quantify the amount of microplastic found in the gastrointestinal tracts of turtles and use biomonitoring tools to calculate the oxidative stress, which can lead to cell and tissue damage from chemical exposure.

“While plastic can cause blockages in turtle’s intestines and even pierce the intestinal wall causing septicaemia, there may be other factors contributing to deaths,” Ms Smith said.

“Along with conducting necropsies on dead turtles to determine what they have ingested, we will gather blood and tissue samples from live turtles in the field to provide a wider picture of their health.

“The study will look at the correlation between the health of individual turtles to their exposure to debris ingestion and answer the question of whether poor health is due to the physical presence of debris or its associated toxicity.”

Ms Smith, a Marine Species Conservation Officer with the World Wide Fund for Nature - Australia (WWF-Aus), has relocated from Canberra to USC’s Fraser Coast campus to conduct her PhD research under the supervision of Senior Lecturer in Animal Ecology Dr Kathy Townsend.

A recent study by Dr Townsend, a renowned expert in plastic ingestion in marine turtles, and the Commonwealth Scientific and Industrial Research Organisation (CSIRO) found that a turtle had a 22 percent chance of dying if it ate just one piece of plastic.

“This will allow us to compare the health of turtles from more pristine areas with others where there are environmental pollutants originating from human activity and high levels of chemical and heavy metal contamination from industrial run-off,” Ms Smith said.

“These chemical and heavy metal contaminants have the ability to bind to biofilm that often coats plastics floating in the ocean, increasing the risk of toxic effects once ingested.”

The research project is funded by USC and through a Destination Australia Scholarship from the Federal Government.

Ms Smith is one of three successful Destination Australia Scholarship students to begin PhD research at USC’s Fraser Coast campus through the new program, which is aimed at attracting more students – both domestic and international – to study in regional locations. 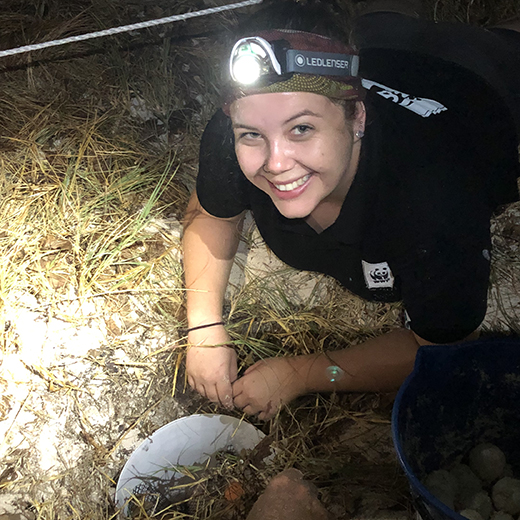