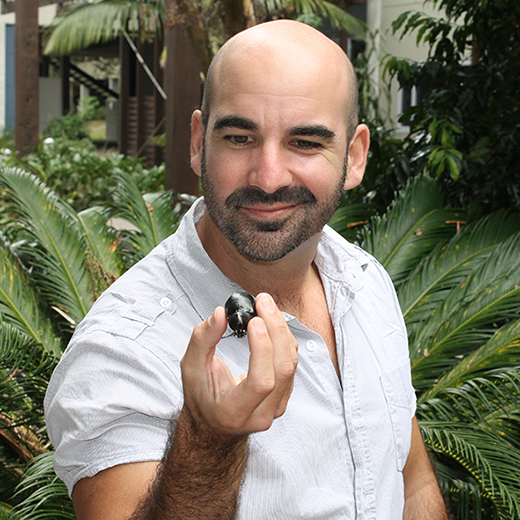 It’s enough to have comic fans climbing the walls – a University of the Sunshine Coast academic has played a key role in research that has all but ruled out the possible evolution of a “spiderman”.

Lecturer in Animal Ecophysiology Dr Christofer Clemente is the co-author of a new study, led by Dr David Labonte of the University of Cambridge, which discovered why geckos are the largest animals capable of scaling smooth vertical walls.

The full paper can be found here: http://biorxiv.org/content/early/2015/12/07/033845
The University of Cambridge report is at: http://www.cam.ac.uk/research/news/why-spiderman-cant-exist-geckos-are-size-limit-for-sticking-to-walls

The project, published today in prestigious journal PNAS (Proceedings of the National Academy of Sciences), found that for a human to scale these surfaces, adhesive pads would need to cover 40 per cent of that person’s body surface – or  the equivalent to having US size 114 sticky feet, said Dr Clemente.

He said another strategy that would allow larger animals to climb walls could be to make the adhesive pads even stickier, rather than bigger.

“In evolution there are trade-offs – if you’re all adhesive, running away from predators is going to be impossible, and if you’re too sticky, you’ll have the problem of being stuck to the wall,” Dr Clemente said.

“For humans to climb walls, we needed a significant jump beyond what animals are capable of doing. It comes down to needing either bigger feet or stickier feet.”

But Dr Clemente said while the research paper might dash the dreams of some aspiring superheroes, the findings had the potential to be applied to make a significant difference to humans, particularly in disaster relief.

“A ‘spiderman’ is the dream of course, but even if we don’t get there, we could perhaps build robots bigger than geckos that can stick to walls, and that would have some incredible potential.

“It could be applied to something mundane like cleaning the outside of a building, right through to having a robot that can go into disaster areas where humans can’t enter, such as in a collapsed building after an earthquake. That would have fantastic humanitarian advantages.”

The authors’ findings were based on studying 225 different climbing species, including spiders, frogs, insects and lizards and a mammal, and comparing their weight and footpad size.

“We scoured the entire animal kingdom for any animal to stick to a wall,” he said. “The analysis was incredible.

“The team looked at everything from mites – the smallest species – as well as a whole pile of insects, spiders, frogs, geckos and even a sucker-footed bat.

“As we got stuck into building a phylogeny of all 225 species, we realised that this was something that people had been trying to do for decades. We really were looking at the whole tree of life and trying to map the evolution of adhesive pads over the top.”

Dr Clemente said he had high hopes that the research he had worked towards would have significant impacts beyond the laboratory.