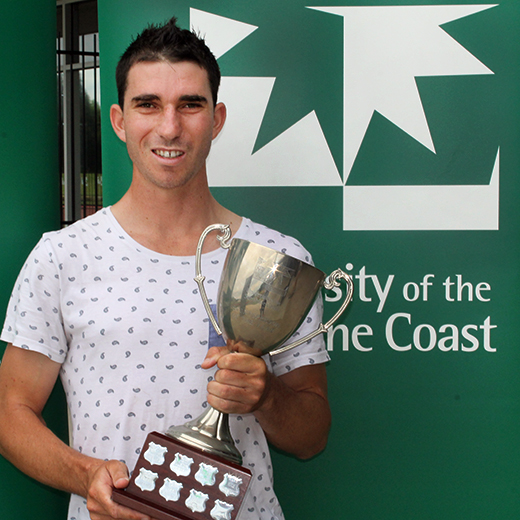 Inspirational para-cycling world champion Kyle Bridgwood has been named the University of the Sunshine Coast’s Sportsperson of the Year for 2015.

The International Studies student from Buderim was presented with the prize at USC’s annual Sports Awards ceremony today for his outstanding results this year in national and international road racing and time trial events.

Bridgwood, 26, won gold in the Men’s C4 Time Trial at the Para-Cycling World Championships in Nottwil, Switzerland, in July in his debut for the Australian team. He backed up this performance at last month’s World Cup in South Africa, taking out gold in the same event.

Winning the world championship was the culmination of years of determination from the former Australian Army private, who was seriously injured when he was struck head-on by a car in Townsville in 2011.

The accident fractured his neck, back and knee, collapsed his lung and severed his patella tendon, resulting in months of painful recovery and rehabilitation.

Now firmly on top of his game, Bridgwood said he had his sights set on representing Australia at the 2016 Rio Paralympics.

“It’s a major honour to receive the Sportsperson of the Year award, considering the number of other athletes at USC who are performing so well,” he said.

USC’s Team of the Year award went to the men’s futsal team, which won bronze at last month’s Australian University Games after an unbeaten run into the semi-finals.

Half Blue awards for sporting excellence went to Shahna Hamment and Lucy Balfour for hockey, Angela Johnson for volleyball and Lindsay Dombrow, Selma Ugland and Yoel Jogiono for futsal.

Jogiono also received the USC Green Award for the second year in a row for his efforts coaching and managing the University’s futsal teams. This award recognises a student who has shown team spirit, leadership and contribution to USC sport as a volunteer or manager.