My name is Emily Marschall and I am currently studying a Bachelor of Biomedical Science (minoring in Biochemistry) at the University of the Sunshine Coast. I began my tertiary education at the University of Queensland St. Lucia campus back in 2017 studying Anthropology and Linguistics (majoring in Japanese), but decided to transfer home mid-2018- and it was the best decision I have made to date.

I have trained and competed in so many different sports from AFL, to diving, rock climbing, and even competing in Hawaii at the Global Games for All-Star Cheerleading. My main sporting focus is the track and field discipline of Pole Vault. I remember it being the first Olympic event I ever saw on television and it was the 2008 Beijing Olympics when Steve Hooker won gold and set the new Olympic record. My young brain thought "well, he's Australian, and I'm Australian, I can do that!". Since then, I have travelled all around Australia, won 3 national medals, won several state titles and met so many amazing people.

Being at USC and apart of the USC HPSA program has allowed me to continue my studies to the ability that I would like while competing at a high level with my sport. Having the facilities to train in, the knowledge from all the USC Sport staff, and the encouragement has made my sporting life so much better. It's amazing to know that my University encourages me to compete while completing my tertiary education. 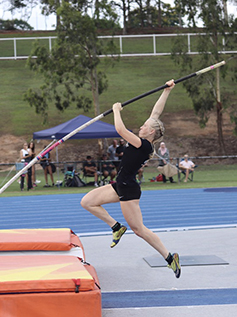